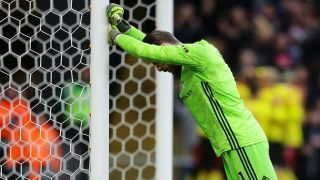 Looks like we’ve moved from the unlock Pogba stage to the unlock De Gea one.

Manchester United have brought in Burnley goalkeeper coach Craig Mawson to work with David de Gea, according to the Daily Mail.

Alvarez wasn’t just a coach to De Gea but a close friend also. His presence definitely would have been lost around Carrington.

This will come as welcome news to United fans, with the Spanish keeper coming in for criticism at times this season, though we’re under illusion that he’s still one of the best in the world.

Dean Henderson has impressed on loan at Sheffield United and could be in line to replace De Gea one day, but Sergio Romero currently looks like the best second choice goalie in the league.

As a player, Mawson represented Morecambe, Halifax and Hereford United, however, he has built a strong reputation as a coach while working with Burnley’s academy.

In 2015, Mawson won the FA’s goalkeeper coach of the year and has been working with Tom Heaton and co in the first team also.

After watching United beat Burnley 2-0, he will link up with his new club later this week.

Next up for United is a trip to the Emirates where they should have the beating of an awful Arsenal side.