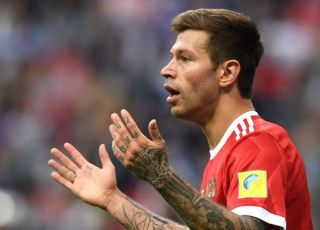 German Tkachenko, the agent of Russian striker Fedor Smolov, has revealed some information on Manchester United showing an interest in his client in 2018.

What makes this super interesting is that none of it was reported when United were allegedly in talks with Smolov’s representatives.

The agent spoke to Russian YouTube channel KraSawa, as cited by Championat and Sport Witness, and said everything was nearly completed with a transfer from Lokomotiv Moscow to Old Trafford.

Until Man Utd went onto to sign Alexis Sanchez instead.

“When we were dealing with the transfer, Manchester United emerged as a surprise option and their interest was real,” Tkachenko said.

“They were looking for a striker and they had two main targets in Paulo Dybala and Antoine Griezmann. They were seeing us as an alternative option.

“When it was clear both players wouldn’t be joining them, we brought him onto the scene. We discussed the wages, agency fees, advertising and other details. Everything was ready but United took Alexis and our move fell through.”

Funnily enough, at the time everyone would have said United made the right decision, but without knowing how good Smolov is we can safely say the Red Devils made a mistake.

Sanchez is still on the books at United, albeit on loan at Inter Milan, and his move turned out to be a disaster.

The agent also added West Ham and Borussia Dortmund were showing an interest to sign Smolov following his performances at last summer’s World Cup in Russia — where he played his part in helping his country reach the quarter-finals.

Smolov is contracted to Lokomotiv Moscow until June 2022.