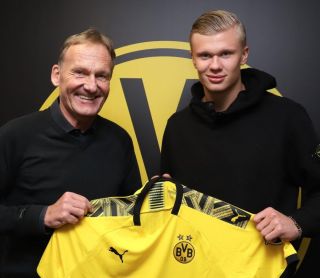 The 19-year-old burst onto the world football stage this season after leaving Norwegian side Molde to join Austrian powerhouse RB Salzburg.

He quickly became Salzburg’s star player at such a young age racking up 28 goals and 7 assists in just 22 appearances.

Eight of those goals came in the Champions League group stages — showing that Haaland is ready for the biggest stage in European football.

When Erling Haaland announced himself to the world with a first-half hat-trick on his Champions League debut ✨ #GroupStageThrowbacks pic.twitter.com/MOKp1qL7gH

Manchester United were thought to be very interested in the striker, as per The Guardian, with Ole Gunnar Solskjaer having worked with the youngster for two seasons at Molde.

It’s a blow for Solskjaer who should be in the transfer market looking for a prolific goalscorer, but maybe Marcus Rashford is ready to step up to plate. The England international has been terrific lately for United.

According to the Daily Mail, United pulled out of a deal to sign Haaland because of demands set by his agent Mino Raiola and father Alf Inge Haaland.

In a press release issued by Dortmund, CEO Hans-Joachim Watzke said: “Despite interest from many other top clubs in Europe, Erling Haaland has opted for the sporting challenge that BVB is able to offer as well as the opportunities we presented him with. Our persistence has paid off.”

The club’s Sporting Director Michael Zorc added: “We can all look forward to welcoming an ambitious, athletic and physically strong centre forward who has a nose for goal as well as impressive pace. We want to improve him as a player at Dortmund. At 19 years of age, he is of course still at the beginning of what will hopefully be a glittering career!”

Haaland himself added: “I had the feeling that I definitely wanted to transfer to this club, take this path and play in the incredible atmosphere that Dortmund provides in front go more than 80,0000 spectators. I literally cannot wait to get started.”

Quotes from The Guardian.

See below for confirmation from Borussia Dortmund, along with a picture of Haaland holding his new shirt.

Borussia Dortmund have completed the signing of Erling Braut Håland from @RedBullSalzburg on a contract until 2024! pic.twitter.com/C9ilU0u0dt