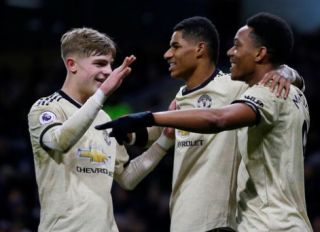 Save the long-winded intro, because Ole Gunnar Solskjaer’s Manchester United were utterly superb , both individually and as a team. The most unconventional, gritty and hard-working performance from both the expected and unexpected candidates led to a 2-0 win over Burnley. Let’s head straight into the Player Ratings.

A clean sheet was the perfect reward for de Gea. He added command of his area and generally solid distribution to some trademark de Gea saves. Many forget that he was the best goalkeeper in the world under the last two managers, and deserves time to improve under Solskjaer.

Surprise of the night! Shivers were likely sent down the spines of United supporters when it was announced that Aaron Wan-Bissaka would be rested in favour of Young, but the Englishman wound back the mileage on his legs and produced a composed defensive display that Wan-Bissaka would be proud of.

Lindelof was superb, offering composure on the ball, battling Chris Wood and coming out first almost every time, and showing command of his back line when needed.

It is extremely strange that Lindelof and Maguire receive some of the criticism that they do, because they are quite easily one of the best defensive duos in England. Maguire was excellent, clearing set-piece after set-piece away from Burnley’s dangerous target men.

Williams explained exactly why he should start against Arsenal this week, with a classy display that left him unlucky not to come away with an assist. The player is leaps and bounds ahead of Luke Shaw at the moment. Also, his yellow card towards the end was ridiculously unwarranted.

After weeks of criticism, it can be said that Fred was solid. Breaking lines with his passing and dribbling, his tenacity also added to the matchup with an extremely physical midfield.

The decision to play Matic tonight proved excellent from Solskjaer, who knew Scott McTominay’s aerial presence would be missed. The Serbian veteran won five aerial duels tonight, as per WhoScored, channeling his inner Marouane Fellaini to contribute to the match despite his obvious deficiencies.

James’ late drives through midfield to retain the ball and create chances proved that he offers so much more than goals and assists. Undying fight, ball retention, intelligence and positive decision-making defined his performance before the sweet and fitting assist, his seventh of the season.

That is, without doubt, Pereira’s best performance for United. The pressing effort to bully Burnley’s defenders allowed him to pick up an early assist before improved confidence saw him slaloming through the opposition midfield. The only possible explanation for his substitution is that he has earned the start against Arsenal.

Burnley had clearly done their homework on Rashford to prevent him from running at players and striking the ball from distance, but eventually, the talisman’s quality shone through as he dumbfounded Nick Pope to seal the match for the Red Devils.

Once again, Martial was menacing, working hard to provide options, making plays for his teammates, and showing the ability he has always had from one-v-one situations. It would have been a 9 if he finished the unreal chance that James created in the later stages.

If anything, Lingard’s cameo provided proof that Pereira was great tonight. The player, struggling for form, was anonymous today, missed a solid chance to score and wrap up the match, and committed a few silly tactical fouls that could have cost United.

Again, the decision from Solskjaer to replace Martial with Shaw, as opposed to Greenwood, was quite surprising. Shaw made poor decisions in attack and looked lethargic despite having fresh legs.