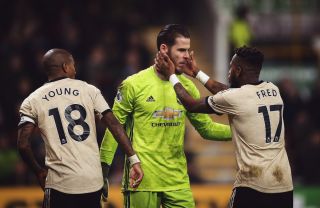 Manchester United’s 2-0 victory at Turf Moor could prove to be a Christmastime classic for Ole Gunnar Solskjaer as he searches for improved results against sides of the mould of Sean Dyche’s Burnley. The win was defined by multiple excellent individual performances and a brilliant overall team display that gives credence to the improvements made by United’s defence and attack over the course of the season.

Solskjaer will be quietly optimistic of his chances heading into the second half of the season with a passionate young side. United are a few Premier League wins away from a challenge on all four fronts, with the FA Cup looming and the League Cup and Europa League firmly in progress.

There was much to take from what was a gritty but classy display from the Red Devils today, including notably improved displays from back to front.

Questions were rightfully asked of David de Gea after the goalkeeper struggled against both Everton and Watford. He responded with a solid display against Newcastle before aspiring to greater heights against Burnley.

Saturday’s match was a throwback to the goalkeeper that was considered the world’s best under Louis van Gaal and Jose Mourinho, as de Gea fought for command of his area, distributed the ball well for the most part, and produced a few truly stunning saves.

The Spain international remains one of the best goalkeepers in the Premier League and on the planet. Easily United’s player of the decade, de Gea deserves patience and time to return to his best.

Against Burnley, Harry Maguire and Victor Lindelof showed why they stack up among the best defensive duos in the Premier League. Maguire’s aerial brilliance was compounded by Lindelof’s rugged performance to earn a clean sheet and produce one of United’s best defensive displays of the season.

Their ability on the ball remains a huge asset to United, allowing Solskjaer’s side to start attacks from deep despite constant struggles in midfield. Lindelof, 25, and Maguire, 26, are still years away from their respective primes, and will continue to grow at the heart of the defence.

The signings of Maguire and Aaron Wan-Bissaka have made a massive, positive impact on United’s defence. Wan-Bissaka is one of the world’s best right-backs from a defensive standpoint, and arguably United’s player of the season thus far. Add an elite young left-back and United will have one of the best back fours in world football for years to come.

The likelihood of a left-back joining United in the January transfer window is low, but given until May, Brandon Williams could cement his place and eliminate the need for a new left-back. The 19-year-old was excellent against Burnley, defending with tenacity before bursting forward and drilling incisive low crosses into the box on multiple occasions.

Having proven that he has the defensive ability to be a Premier League fullback and the attacking quality to complement the more defensive Wan-Bissaka at right-back, Williams now simply needs to iron out the inconsistencies and errors in his game. Achieving that, he will be United’s left-back for years to come.

United’s young forwards are the future of the club

Anthony Martial, Marcus Rashford and Dan James all added to their goal/assist tallies at Burnley, improving upon their already impressive numbers this season. Alongside Mason Greenwood, the three forwards have been key to United’s counter-attacking success this season and formed the most cohesive attack that Old Trafford has seen post-Ferguson.

While Rashford’s strike at the end of the match brought him one closer to the 20-goal mark that often categorizes world class wide forwards, it was once again Martial’s all-round play that held United together in attack. James was undoubtedly the best of the three, though, escaping Burnley’s physical midfield with darting runs and undying determination until he was rewarded with the assist he deserved.

Given that Martial is the oldest of the four players and he is only 24, the future is bright for this Manchester United attack. With 55 combined goals and assists this season, expect the four players to be aiming for close to 100 by time the campaign wraps up. Looking into the future, with a little bit more squad depth and maturity, this United attack could be lethal.

The future is bright for United

The first four lessons explained why Manchester United’s defence and attack both have a promising future. While there are still certain squad gaps to be filled and gaping holes in the side’s midfield, having a solid base for the future at both the defensive and attacking ends of the pitch should lay down the foundations for years of success for United.

Make no mistake; despite spending much of the first half of the season in the lower half of the bottom 10, this is the most promising United side since Ferguson retired. With Manchester City beginning to fall from dominance and Liverpool simply unable to sustain their current form, United could be looking at success sooner than later if Solskjaer and the squad continues to progress as it has thus far.

Youth, courage, and success were the three words that United used to announce the signing of Dan James this summer, and they continue to be the thematic centre of Ole Gunnar Solskjaer’s exciting tenure.