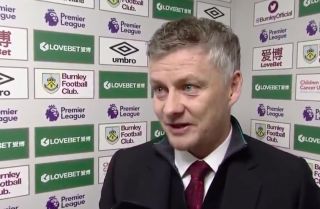 Ole Gunnar Solskjaer has explained that he does not want to rush Paul Pogba back into action, after leaving him out entirely from United’s squad to face Burnley at Turf Moor this evening.

Pogba made an impact from the bench in the last two games against Newcastle and Watford after returning from a long-term layoff, and was expected to start in place of Scott McTominay who was ruled out with a knee injury.

But Solskjaer is being cautious with Pogba and said that, after featuring in two recent games, he may not have been ready to start tonight.

READ MORE: Why Paul Pogba is not in Manchester United squad to face Burnley

Nemanja Matic is given a rare start in midfield in the Frenchman’s absence, in one of four changes from the side that swept away Newcastle on Boxing Day.

Elsewhere, Brandon Williams comes in for Aaron Wan-Bissaka who starts on the bench this evening. The full-back is perhaps being rested for the game against Arsenal at the Emirates on New Years Day.

Ashley Young captains the side and is likely to start at right-back with Williams in his preferred left-back role ahead of Luke Shaw this evening.

Solskjaer has also opted to start Daniel James on the right-flank ahead of Mason Greenwood, who scored with a brilliant strike against Newcastle. Many fans had called for Greenwood to retain his place after making another impact on Boxing Day, but James comes back into the side fresh and raring to go after being an unused sub on Thursday.

Listen to what Solskjaer had to say about Pogba’s absence below, courtesy of MUTV:

🎥 "It's a quick turnaround — we've had some players playing quite a bit — so there are some fresh legs coming in."