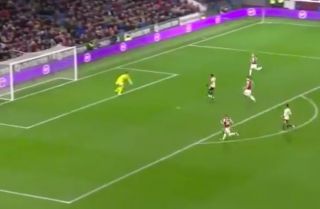 Anthony Martial has given Manchester United a deserved lead against Burnley at Turf Moor.

The Reds have dominated the first-half against Sean Dyche’s men, without creating a host of clear cut opportunities.

And Martial has continued his impressive goalscoring form with the opener late on in the first-half.

Andreas Pereira capitalised on a mistake from Burnley defender Charlie Taylor, before playing a wonderful pass to Martial.

The French striker made no mistake, calmly slotting the ball past a helpless Nick Pope.

United can move fifth in the league just one point off the Champions League places if they can go on to secure victory this evening.

The Frenchman's 10th goal of the season 👊 pic.twitter.com/ReQSM44i8o