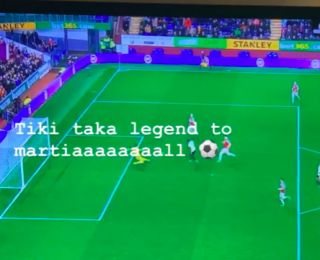 Paul Pogba has posted a brilliant Instagram reaction to Manchester United’s opener against Burnley at Turf Moor this evening.

Anthony Martial gave the Reds a deserved lead against a stubborn Burnley side late on in the first-half.

Andreas Pereira’s pressure forced Charlie Taylor into a mistake on the wing. The Brazilian midfielder then played through a perfectly-weighted through ball to Martial one-on-one with Nick Pope.

The French striker made no mistake in scoring his third goal in two games, calmly slotting the ball into the bottom right corner.

United have completely dominated Burnley, despite concerns they would struggle in Pogba’s absence.

The midfielder is watching the game from home after Solskjaer left him out of the squad this evening. The United boss explained his decision to omit Pogba from the squad entirely, suggesting he is not yet ready after featuring in two games in quick succession after his comeback from a long-term injury layoff.

Perhaps Pogba will start against Arsenal at the Emirates Stadium on New Years Day.