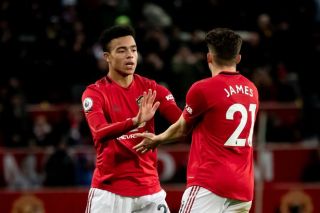 Manchester United starlet Mason Greenwood has deservedly received plenty of plaudits following his goal against Newcastle and statistics suggest we have a real cracking player on our hands.

While Anthony Martial and Marcus Rashford are both ahead of him in the manager’s plans right now, Greenwood has mostly been used in the cup competitions and he has made full use of it.

He got a rare start in the Premier League against Newcastle and scored a fine goal from outside the penalty area —hitting the Magpies where it hurts after committing a defensive mistake.

There’s even a chance he could start against Burnley later today on the back of his performance against Newcastle.

Greenwood has mostly played out wide on the right but that hasn’t held him back one bit. If he keeps working hard, one day his chance will come in the centre forward role, especially if he keeps finishing the way he has been all season.

Mason Greenwood has netted eight goals in all competitions this season – the only teenager with more in Europe’s big five leagues is Jadon Sancho (12). #MUFC [BBC] pic.twitter.com/8aWZt0q0Tf

Looking at the stats above, it looks inevitable that Greenwood will finish his breakthrough season on double figures.

Jadon Sancho with 12 goals is the only teenager in the top 5 leagues with more goals than the United youngster, and he is a more established player after making a name for himself in the Bundesliga with Borussia Dortmund.