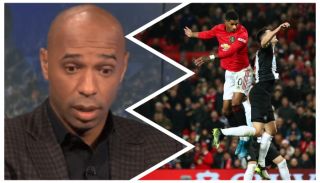 A role the young Man Utd forward was given at the start of the season — during Anthony Martial’s absence due to injury — but it never quite worked out and he’s performing much better now on the left.

Martial’s return to the team saw Rashford pushed out wide, where he plays for England, and he’s been scoring at ease ever since.

Former Arsenal striker turned pundit Henry was full of praise for Rashford, who took his tally to 18 for the campaign after a fine header against Newcastle on Boxing Day.

This is what Henry said on Amazon Prime Video (via Manchester Evening News): “That means, he’s quick. People want him to play on the left or right because he’s quick.

“I think he can do a hell of a job as a number nine. I always have confidence in him in front of goal.

“But I like his tenacity. He’s lively, he runs at people. People are seeing him with a difference eye now and he needs to keep doing this.”

And there’s a reason so many United fans are crying out for a proven goalscorer.

Unfortunately neither of Ole Gunnar Solskjaer’s main attacking men — Martial and Rashford — have shown enough consistency in the centre-forward role.

However, some of the blame should be pointed at the midfield.

Paul Pogba has been out injured for most of the season and even with him in the team the attacking players sometimes look starved of service.

Everyone has their opinion of Jesse Lingard and Juan Mata, but the truth is they aren’t providing the goods on a consistent basis and it’s killing the team.

If United make moves in the January transfer market it needs to be a playmaker.