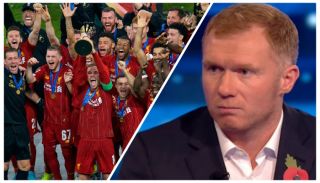 Who’s going to argue with this?

Liverpool claimed the trophy in Qatar last week after beating Flamengo in extra-time.

But Scholes, who lifted the trophy with Man Utd in 2008, has played down the significance of winning it.

Speaking to BBC Five Live, Scholes said: “You want to win it once you’re there but I don’t think it was ever something we were desperate to win.

“Even now if someone said to you ‘What trophies did you win over the years?’ I don’t think we’d mention the Club World Championship.”

“Even now if someone said to you ‘What trophies did you win over the years?’ I don’t think we’d mention the World Club Championship.” 👀

They won it just like #LFC back it in 2008…#MUFC legend Paul Scholes tells @RobbieSavage8 his badminton trophy is more important to him 😂 pic.twitter.com/UYQAbpcgiw

As someone who has won the Club World Championship, Scholes is in a better position to discuss its significance than most, but Liverpool fans are bound to show their disapproval at his comments.

He went on to joke that a badminton triumph of his at a local club meant more than his Club World Cup honour with United.

However, as we enter a new year there is reason to fear the worst with Liverpool on course to winning their first ever Premier League title.

The gulf between them and the rest of English football increased on Boxing Day after their 4-0 trashing of nearest title rivals Leicester City.

It will be a different story when they win that…