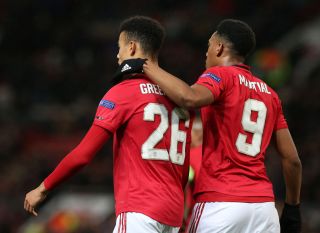 Manchester United goal scorers Anthony Martial and Mason Greenwood earned praise after guiding their team to a 4-1 win over Newcastle.

Martial scored a brace, Greenwood netted a thunderbolt strike with his left foot, and Marcus Rashford added to his tally for the season with an impressive header. The four goals came after Newcastle took the lead thanks to some shoddy defending.

Match of the Day pundits Ian Wright and Danny Murphy singled out two of the above for praise following their performance against the Magpies.

Wright focused on Greenwood on the BBC highlights programme.

“It was a very good afternoon for Manchester United’s forwards,” the former Arsenal man said, as quoted by Manchester Evening News. “I watched him [Greenwood] against Everton as well and he has this surety that you can see he is going to be something special. He’s 18, second Premier League start [of the season].”

Looking closer at his goal, which made it 2-1 to United, Wright added: “Once he gets the ball, there is no rushing, he’s calm, bang. It’s the same as the goal he scored against Everton, he didn’t rush it, he didn’t slash at it.

“For me, as long as they make sure they nurture him right and they don’t rush him through, he’s going to be something really special. Really, really impressive.”

Martial was singled out too, which makes us feel a little bit sorry for Rashford. Then again the England forward has received lots of praise lately; since he’s been scoring goals for fun.

Former Liverpool midfielder Murphy believes Martial is more potent in the central striker’s role, as opposed to playing out wide on the left.

“I think playing centrally suits him,” he said. “He doesn’t particularly want to chase full-backs all game. One criticism of him has been what he does without the ball. Today, what he did without the ball today impressed me most.

“The [first] goal probably helped, it gave him the energy, confidence.

“He starts the press, he sets the tone. More often than not, he doesn’t do it but maybe he’s had a telling off from the manager. He had tricks, skills, bits of awareness.

“When he is playing like this he makes Manchester United a much more threatening team. They are a much better team with him and it’s important he stays fit because they don’t have many options to replace him.”