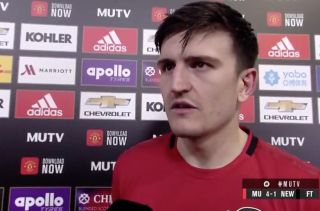 Harry Maguire believes Manchester United need to tighten up at the back and build on their stronger performances of late.

The England defender has highlighted the importance of regular clean sheets as Man Utd seek to establish a period of consistency under Ole Gunnar Solskjaer this season.

After beating Newcastle 2-0 on Boxing Day, the Red Devils are just four points adrift of fourth-placed Chelsea in the Premier League — a gap that should have been closed before Christmas, if United weren’t dropping silly points against Everton and Watford.

Our inconsistency has led to doubts over Champions League football for a second consecutive season.

But United showcased their attacking prowess once again and scored four against Newcastle at Old Trafford thanks to an Anthony Martial double and goals from Mason Greenwood and Marcus Rashford.

Newcastle did, however, take the lead in the first-half with Matty Longstaff taking advance of some shoddy defending to fire past David de Gea.

United haven’t kept a clean sheet in the Premier League since the 1-0 victory over Leicester on September 14, despite making Maguire the world’s most expensive defender last summer.

“We want to get back to clean sheets; we’re working hard to get clean sheets,” Maguire told reporters after the match (via Goal.com).

“We’re not conceding many chances in many games, but it’s something that we’re going to work on. We’re going to improve.”

On consistency and a top-four finish in the league, Maguire added: “That’s the key. You’ve got to put performances together, put wins together.

“It’s really important that you go on runs in this league. We haven’t really found that consistency to put three, four, five wins together. It’s something that we need to work on.

“We’re a young group, we’re learning, [and] there are positives to take from today but now we’re focused on Saturday.”

💬 “It’s nice to get the three points and give the fans something to cheer about over Christmas.”