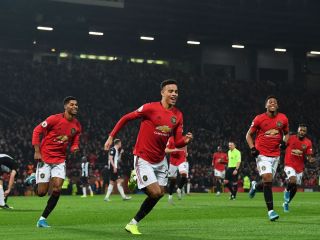 Ole Gunnar Solskjaer heaped praise on Mason Greenwood for his performance in yesterday’s win over Newcastle.

Manchester United came from behind to hammer Steve Bruce’s side 4-1 at Old Trafford on Boxing Day.

Anthony Martial scored a brace while Marcus Rashford and Greenwood got a goal each against the Magpies.

The 18-year-old scored United’s second goal and it was a stunning strike after a misplaced pass by a Newcastle defender. Greenwood picked up the ball before striking it wonderfully from outside the penalty area.

Solskjaer praised his young star after the match, speaking to the official Manchester United website: “I think Mason is 50-50 with his left and right, probably 60-60 because he is so good with both of them. It’s hard for defenders. There are not many I can remember like that, but he has every single technique as well. He can strike it or place it. Mason can hit it with both feet and he’s an exceptional finisher.

“He’s got the lot to improve on. He’s young and he’s got to learn the game. He knows what he needs to learn. He’s been told. I can remember when I was 18 and I wasn’t anywhere near playing at the level he is. He is learning and growing as a human being as well. He’ll grow more and more. We’re not going to see the best of Mason for a couple of years.”

Greenwood has been given a number of opportunities this season and he’s not had problems in front of goal. Although Martial and Rashford are scoring goals at the moment, Greenwood certainly looks a better finisher than both, and if he grows into the player Solskjaer thinks he can we could be talking about a world beater.

He has scored eight goals and provided three assists in 20 appearances across all competitions.