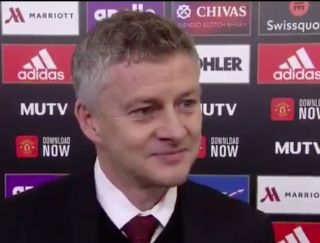 Ole Gunnar Solskjaer has made two changes for the Boxing Day clash against Newcastle at Old Trafford, but Paul Pogba does not make his return to the starting line-up.

Andreas Pereira starts in the number 10 role ahead of Jesse Lingard, and Mason Greenwood is selected on the right-wing in place of Daniel James.

Pogba was United’s only bright spark in the woeful performance against Watford at Vicarage Road on Sunday, making an immediate impact in a cameo from the bench in the 2-0 defeat.

The Frenchman provided some urgency and creativity in United’s attack, but by the time he arrived on the pitch, the damage had already been done.

Many had expected to see him start against Newcastle at Old Trafford, but Solskjaer has explained pre-match that he is being cautious in drip feeding him back into the team after a long-term injury layoff.

We expect to see Pogba again make an appearance from the bench this evening, and his impact may be needed with the Reds struggling to break down defensively organised sides like Newcastle this season.

He may also start in the game against Burnley at Turf Moor in just two days time.

Hear more from the boss ahead of #MUNNEW — sound 🔛 pic.twitter.com/yKM90lpsCg