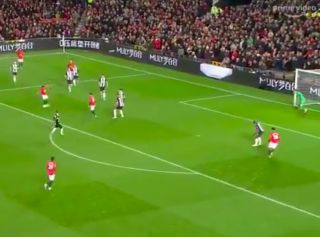 Anthony Martial has equalised for Manchester United, minutes after Newcastle had taken the lead in the Boxing Day fixture at Old Trafford.

Matty Longstaff opened the scoring for Steve Bruce’s side, but just seven minutes later Martial finished at the near post.

READ MORE: (Video) Solskjaer explains why Pogba has been left out of Man Utd team to face Newcastle

The Reds have been poor but burst into life on the break. Luke Shaw found Andreas Pereira in the box who set up Anthony Martial to finish into the bottom corner.

His shot should arguably have been stopped, but United now have a platform to build on and need to push on and get a much needed victory.

See his goal, courtesy of Amazon below: