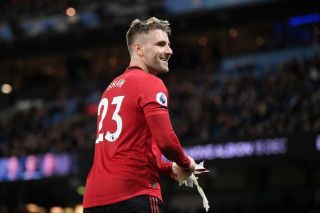 Ahead of Manchester United’s Premier League clash against Newcastle later today, Luke Shaw has made a bold claim despite our ongoing struggles this season.

The Red Devils are the only team to take three points from Liverpool in the league this season but sit 8th in the table, 24 points behind Jurgen Klopp’s men after 18 games.

Speaking to the official Man Utd website, Shaw expressed how he believes Ole Gunnar Solskjaer’s squad compares to the likes of Liverpool and Man City.

“I feel that the squad we have is no different from the squads that are challenging for the title. We’ve got such amazing players and some amazing young players who are still learning. I’ve got full confidence in this squad and in the manager.”

It’s a sorry sight to see today’s opponents Newcastle on the same amount of points as us. Yes, they’re having a good season by their stands but we really haven’t got going yet.

Unfortunately, I can’t say I agree with Shaw because this team requires a lot more quality before it will muster up a title challenge. The mentality seems way off too, given how United can go into one week beating Tottenham and City to another week drawing with Everton and losing against Watford.

Bar a few top-class names, it’s a very young squad but there is a lot of average players who are stealing a wage at Old Trafford. Fans want to see the club invest in January and in the summer.