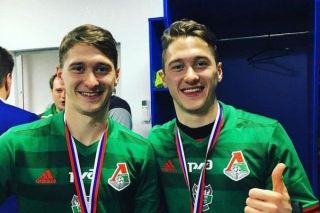 Lokomotiv Moscow playmaker Aleksey Miranchuk has been linked with a move to Manchester United.

That’s according to Italian outlet TuttoMercatoWeb (via Daily Star) and it’s the first we’ve heard of Miranchuk.

The report claims that Man Utd are preparing a bid of around £35m for the Russian to fight off interest from other interested clubs.

Apparently the player’s representatives are directing Miranchuk towards United.

The 24-year-old attacking midfielder scored two gaols against Juventus in Lokomotiv’s group stage encounters in the Champions League, which earned him rave reviews and now it sounds like he is on United’s radar.

Miranchuk has 9 goals and 4 assists from 21 appearances across all competitions this season, making him a key figure in the current Lokomotiv side, so they’ll be reluctant to leave him go on the cheap.

The Red Devils need a fresh injection of creativity in midfield with Jesse Lingard unable to provide the service needed on a consistent basis. Meanwhile, Juan Mata is past his best and Andreas Pereira simply isn’t good enough to play as a No.10.

As a result, United’s performances in recent times have been unsatisfactory.

There’s a lot of reliance on star forward Marcus Rashford who has 10 league goals to his name thus far this season.

Miranchuk is in good form at the moment and may be worth taking a closer look at between now and the end of the season. The claims aren’t big enough to suggest anything will happen in January.