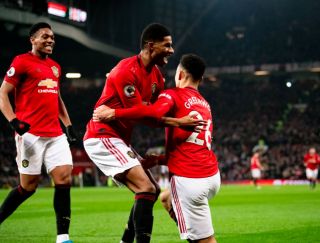 After initial chaos that led to conceding early, Manchester United found their composure and dispatched Steve Bruce’s Newcastle. Goals from wingers Marcus Rashford and Mason Greenwood were capped off by a striker’s brace from Anthony Martial, allowing United to climb within four points of the Top 4.

Contributions from the younger half of United’s squad continue to carry the side through the season, and with Paul Pogba returning to form and fitness behind them, the second half of the campaign could be exciting for Solskjaer’s side, as reflected in today’s Player Ratings.

After making an error last week, de Gea returned to his usual business this time out and showed assured distribution and command of his area for the little he was tested. A clean sheet would have been nice to reward the low-confidence goalkeeper, but the Spain international was left helpless for the goal.

Making a human error last week to give away the penalty, which was converted by Watford’s Troy Deeney, Wan-Bissaka atoned for his error with one of his better displays in an already shining debut season. The fullback added to his usual defensive dominance with an assist and proved his credentials as arguably United’s best player this season.

Maguire was visibly frustrated by the first goal, but he was not at fault, and the rest of the day was usual business for him. Criticizing the England international for his transfer fee is pointless, because he improves the back line immensely.

Much of what was said about Maguire also applies to Victor Lindelof today. Despite the constant scrutiny facing the United defence, Maguire and Lindelof still seem to be the best duo at United and one of the best in the Premier League.

Shaw faced a few struggles early in the match before settling in and getting to his usual business. I am not one for criticizing him every week as many have been of late, but he needs to do more to prove himself in both attack and defence, especially because he has the potential.

McTominay struggled a little bit again today and was not helped by the displays of his fellow midfielders. Ultimately, he did enough before being hooked for Pogba at half-time, presumably because he was on a yellow card and will start on Saturday.

The Brazilian midfielder very finely treads the line between excellence and abhorrence, sometimes even within matches. Like many others in the side, he started with a series of poor attacking plays before being the main culprit for the goal conceded by United. Fred eventually recovered and played his part in the match, perhaps helped by Pogba’s presence in the side.

Greenwood’s goal, though enabled massively by a deflection, capped off his great performance today and reminded viewers of his potential. He seems to be United’s best option to play from the right-wing given Dan James’ natural inclination to playing from the left.

Pereira perhaps escapes criticism tonight for a few reasons, one being his assist on the night and the other being his occasionally bright spark from dead-ball situations. Ultimately, United should be aspiring for much more quality in their advanced midfielders, and he stood out as the weak link in an attacking setup that performed superbly on the night.

Once again, Rashford attempted his best Ronaldo impression with the leaping header that secured the three points for United, improved his tally to 15 goals for the season, and further cemented his place as the side’s main threat in front of goal.

Martial was hardly world class today, but he reaped the rewards of the last few difficult weeks. The striker has faced scrutiny and struggled for a lack of service, as many United strikers have in recent years, but today, his eagerness was awarded with two simple but effective goals. Martial could have even had a third, but Solskjaer rightfully substituted him later in the match to save him for Saturday.

Pogba’s introduction to the side was a refreshing addition to United’s often unambitious midfield. His score perhaps doesn’t reflect the clear impact he had on the side as the match was mostly over by time he made his way onto the pitch.

Once again, both had the opportunity to stake their claim for a place in the side, but they were anonymous and, like Pereira, will struggle for a future at this club as Solskjaer moves towards younger and greener pastures.