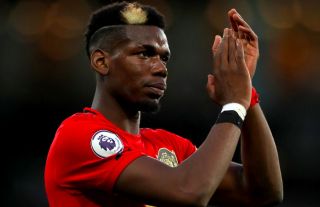 Paul Pogba has been left out of the Manchester United starting eleven to face Newcastle at Old Trafford this evening.

The Frenchman has not started for the Reds since the 1-1 draw against Arsenal on September 30, but many fans had expected to see him return to the team today.

Pogba’s return was United’s only bright spark in the Watford defeat on Sunday; the midfielder provided some much needed creativity and urgency in what was a woeful United performance.

Solskjaer praised Pogba’s impact after the defeat at Vicarage Road, but has remained cautious in rushing him back to action as he is left on the bench.

Perhaps the Frenchman will start in two days time as the Reds face Burnley at Turf Moor.

Instead, Andreas Pereira replaces Jesse Lingard in the number 10 role, and will start in a midfield three alongside Fred and Scott McTominay.

We had expected to see several changes after the inexcusable showing against Watford on Sunday, but Mason Greenwood for Daniel James on the right-flank is Solskjaer’s only other change.

Newcastle beat the Reds 1-0 at St James Park earlier in the season and will be confident in getting a result this afternoon if they set up in a similar manner.

See what some Reds had to say about Pogba’s absence below:

Man United's best player Pogba on the bench but Pereira made the starting XI.

I'd put a 10% fit pogba before Andrea's every time pic.twitter.com/S2K6aaDl0Y

I don’t understand why Pogba isn’t starting but anyway at least Greenwood is! Maybe thought Williams would have got a start but anyway let’s see if we can break down this stubborn Newcastle side.

I don’t get it! Play your best player Pogba! Don’t think about Burnley! Game by game! This man it’s mocking us 😒🤦‍♂️

Hopefully he comes on very early in the 2nd half, ideally the 50-55th minute

"Ole is a clown for playing Pogba vs Rochdale"

"Ole is a clown for benching Pogba vs Newcastle"

Greenwood finally starting but no Pogba ffs. We are going to struggle to break this low block down again https://t.co/hgZyOACrJ0

I'm happy with the lineup. Pereira at #10 > lingard against teams that defend deep. Even greenwood for James is a very good inclusion. I'm actually surprised Ole got the lineup right for once, Pogba to be subbed on later. If we still don't win, idk what to say