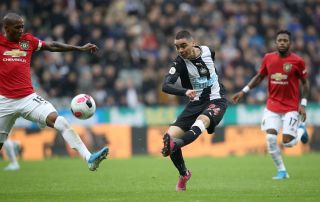 Paul Pogba is back and should be in the starting line-up on Boxing Day as Manchester United host Newcastle United.

The Frenchman came on as a substitute in the 2-0 loss to Watford on Sunday. It was probably the only positive we could take from the game after an abysmal performance.

“It’s a big plus,” said Ole Gunnar Solskjaer said, as per ManUtd.com. “The boy has been working hard, he’s been desperate to play football and he came on and showed that hunger, urgency and quality so I’m sure we’ll benefit from him coming back.”

Pogba’s return shows that the club’s injury list is clearing at a crucial time.

“We’ve got two games coming up over Christmas and we need to bounce back,” he added.

Steve Bruce’s Newcastle are expected to be without Paul Dummett because of a groin injury but Jetro Willems is back training and could feature.

It’s frightening that these two sides are separated in the Premier League table by goal difference.

With Bruce quenching early relegation fears by making his time hard to beat, Solskjaer is still under pressure despite recently beating Tottenham and Man City over the course of a week.

The Red Devils have consistently struggled to breakdown defences using the low block this season.

However, the return of Pogba could provide United with the creativity spark needed to unlock stubborn defences.

What the managers had to say

Solskjaer said (via BBC Sport): “It’s going to be difficult to break teams down. I expect that we’ll get a fair share of the possession. We were disappointed when we had more than 70% possession up there and we lost the game.

“One of the good things about our team this year, we have reacted well after bad results. We haven’t kept the consistency as we’d like the other way, but we’ve also not gone on a big run like we did towards the end of last season. So there will be a reaction definitely.”

Brucey knows all about going to Old Trafford — from playing there as a player to taking the teams he has managed — and he’ll have some words of experience for his players.

“Make no mistake — when you go to Old Trafford, you have to play well, be brave when you have the ball and pose a threat,” the Newcastle manager said. “That’s what we’ll be focusing on.

“We’ve got Manchester United, Everton and Leicester [coming up] — a hard, hard week lies upon us. But that’s the beauty of the Premier League.”

Steve Bruce will get a great reception from the Old Trafford faithful and he’s doing a good job at Newcastle, but he will not be leaving with as much as a point.