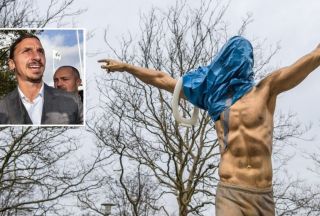 Vandals have once again damaged a statue of Zlatan Ibrahimovic, with the nose being sawn off and stolen.

The statue which can be seen in the Swedish city of Malmo is three-meters tall and is placed outside the stadium of Ibrahimovic’s former club, Malmo FF.

Since being unveiled in October, the state has been targeted on several occasions in protests over the player’s recent investment in their rivals, Hammarby.

They’ve defaced the statue with a toilet seat, set it on fire, sprayed silver paint over it and removed a foot in another saw attempt, as reported by Euronews.

We learned last month that the former Manchester United striker purchased around a quarter of the shares in Hammarby — which did not sit well with fans of Malmo.

Currently a free agent after a stint in the MLS with LA Galaxy, the future of Ibrahimovic remains unknown. A successful player like the Swede would make a difference in most teams and we’re eagerly anticpating his next move.

Ibrahimovic has a pretty sizable nose and would look very strange without it! See the photo below of the statue after being vandalised again, courtesy of the Mirror.