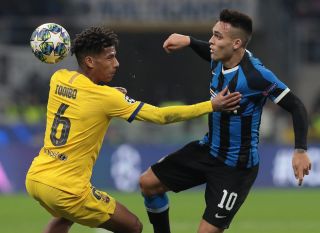 The 19-year-old is being linked with a move away from the Nou Camp after making just three appearances in all competitions this season.

Of course, you are bound to ask how does that make him good enough for Man Utd?

Sport in Spain claim the Red Devils face competition from the likes of Bayer Leverkusen and AC Milan for his signature.

Ole Gunnar Solskjaer is attempting to rebuild the current United side with young and hungry players, so Todibo may well be a target for the future.

However, it is understood that Barcelona want to sell him with the option for them to sign him back within the next two seasons – so, a similar scenario to Cesc Fabregas joining Arsenal in 2003 only to return a much more experienced player 8-years later.

Barcelona are expected to demand £17m for the defender despite signing him for just £1.7m from Toulouse a year ago, as per The Sun.

And, I really don’t think United can afford to put their nose up at such players because Barcelona could come knocking for them in the future.

Solskjaer doesn’t have all the time in the world and needs to buy smartly.

The Norweigan bought well in the summer, though we will expect more from all recent signings over time, especially Harry Maguire who has been least impressive of the three new arrivals.

Aaron Wan-Bissaka, too, has had his shaky moments. Daniel James has gone quiet on the goal contribution front but he’s still coming to terms with top-flight football.