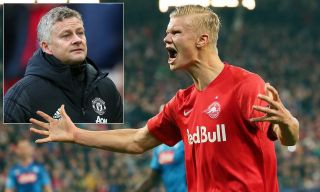 Norway international Haaland has been tipped to make a move in the January transfer market, with the Metro claiming Bundesliga outfit RB Leipzig are hopeful of beating Man Utd to a deal.

Now it sounds like something has changed as Leizpig make an admission on Haaland’s high salary demands.

It helps that United manager Ole Gunnar Solskjaer was in charge of Haaland when the striker broke through at Molde.

Solskjaer has spoken of his admiration for his fellow countryman but it remains to be seen where Haaland will end up next.

With the Red Devils lacking a lethal goalscoring centre-forward and Haaland proving himself on the biggest stage in the Champions League — 8 goals in the group stages — it makes perfect sense for Solskjaer to try persuade the youngster to join him at Old Trafford.

Leipzig’s head of soccer, Oliver Mintzlaff, admits United could have an advantage in signing Haaland because of our financial strength.

“Yes, we met with him. We are interested in the player, great interest,” he told Sport 1 (via Manchester Evening News). “He listened to it, logically, and is very open to a move. He would like to change (clubs) in summer at the latest.

“It is not easy. There’s Manchester United, Juventus, Borussia Dortmund. There are a few other clubs as well.

“Of course, our club also has certain guard rails and limits. And I have named the clubs that compete, and there may be salary regions that we don’t want to go into. (The fee) is still manageable, but the package does not only consist of the transfer fee.

We gather that Leipzig’s director is convinced Haaland would pick Leipzig if they could meet his wage demands, presumably influenced by the striker’s agent Mino Raiola.

Stretty News will cover the Haaland saga closely next month as soon as the transfer window reopens.