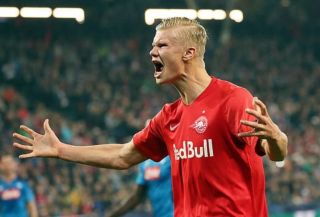 Erling Haaland is reportedly getting closer to choosing his next club with a move in January likely.

The 19-year-old is probably the most coveted striker across Europe right now, after netting a staggering 28 times for Austrian League side RB Salzburg already this season.

Manchester United manager Ole Gunnar Solskjaer has made no secret of his admiration for the player he struck a good relationship with during his time at Molde, and the Reds are in need of attacking reinforcements in January.

Haaland fits the bill of young exciting talent Solskjaer seems to be targeting, and would provide a different option in the frontline rather than Marcus Rashford or Anthony Martial up front.

The youngster has been linked with a host of top European clubs ahead of the upcoming January transfer window, but Goal journalist Ronan Murphy has provided a fresh update, as sourced by German publication Bild.

Murphy tweeted that Haaland will definitely make his move in January as opposed to the summer, and the Bild report has ruled RB Leipzig and Juventus out of the race to sign him.

We expect to hear a lot more about the future of Haaland in the coming days as the January window fast approaches, but it seems the Reds are still in the hunt for the striker’s signature.

Solskjaer on rumours about signing Erling Haaland: "He knows what he wants to do, and he knows what he's gonna do" pic.twitter.com/6nca6upVJy

Erling Braut Haaland is leaning towards either Borussia Dortmund or Manchester United, and will choose one of those rather than RB Leipzig or Juventus, according to Bild. #RBS #BVB #MUFC #RBL #Juve