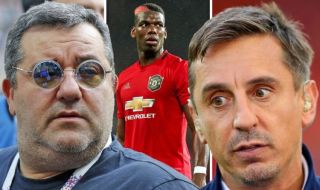 Last week Mino Raiola told The Telegraph that Paul Pogba wants to stay at Manchester United and “win prizes”, squashing rumours that he could leave Old Trafford in January.

Speculation has been ongoing about the 26-year-old’s future ever since the French midfielder admitted over the summer that he was open to a new challenge elsewhere, as reported by The Guardian.

Pogba hasn’t played a lot of football with United this season after sustaining an ankle injury, although he returned to action on Sunday, coming off the bench as United lost 2-0 to Watford at Vicarage Road.

“Paul Pogba is Manchester United’s best player. Let’s be clear about that. He is the best player in the club. The big question mark is over his long-term future at the club because a large part of me believes he wants to play football elsewhere.

“It’s not a good look when your best player says he wants to leave because the team isn’t good enough. Manchester United have to get better players into the club, experienced players who can help the young players. They need some short-term experience in that squad.”

Real Madrid are constantly linked with the World Cup winner.

However, the latest from the Daily Mail suggests that the La Liga giants have told Pogba they won’t try to buy him in January after the emergence of Fede Valverde.

Ole Gunnar Solskjaer needs to get to the bottom of this situation as soon as possible in order to plan for the future. He needs to know whether he’ll be planning with or without his best player.