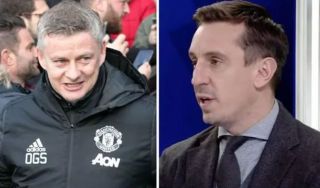 Gary Neville believes Ole Gunnar Solskjaer should consider bringing Juan Mata back into the starting eleven as they look to address their current creativity issue.

We touched on Manchester United’s problems in attacking midfield already today, in a piece reflecting on the 2-0 defeat against Watford on Sunday, but Solskjaer must look to alternatives until the club brings a new name in.

Man Utd have struggled to break down defensive teams in the Premier League this season and it has been joked about how Solskjaer’s men seem to do better against the better teams.

That has a lot to do with those teams coming at United, therefore, opening up to be counter-attacked.

The Red Devils host Newcastle at home on Boxing Day and Neville thinks Mata must be considered.

“They’ve had problems against teams who essentially defend deep, who are compact,” Neville told Sky Sports (via Manchester Evening News).

“Even last week against Everton, when Everton got into their shape. So the games that have been causing United problems have been this type of game.

“The players have got a real problem, they haven’t got enough creativity in the final third when they play against a deep defence, it’s as simple as that.

“They prefer counter-attacking, so that’s the issue. It’s a problem for United, Ole Gunnar Solskjaer has got to try and get around it.

“He’s not used Juan Mata that much, but he is the one who potentially could find passes in tight spaces, so whether he could be introduced.

One player who has been linked with a move to United for a while is Leicester City playmaker James Maddison, as per talkSPORT, which could see him reunite with ex-Leicester teammate Harry Maguire.

Maddison will know plenty of the United lads already from his call-ups with the England squad, though he has yet to really shine for Gareth Southgate’s side.

Of course, when it’s United there are always a handful of players in each position linked with a transfer. Aston Villa’s Jack Grealish is another but Villa manager Dean Smith has told the Red Devils to forget about signing their star player (via The Sun).

It now depends on when one of these players will be signed — and it could be someone else, with no Premier League experience.

But for now Solskjaer needs to decide who to persist with… Jesse Lingard was woeful against Watford on Sunday.