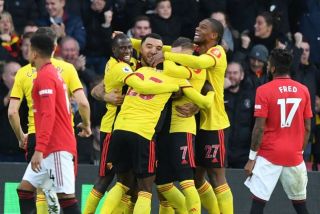 Manchester United’s 2-0 loss against Watford was not much of a surprise if you have followed Ole Gunnar Solskjaer’s side this season. The same symptoms as usual were evident on Sunday, as creativity was sparse, the chances it yielded were not capitalized upon, and individual errors undid solid defensive work throughout the match.

Also typical is what can be taken from this, as there are many lessons to learn about Solskjaer’s side and how the future shapes up for them.

There is much debate around whether Solskjaer is the right man for the United job long-term. Solskjaer is as much perfect as he is the reason for David de Gea making basic goalkeeping errors and Jesse Lingard missing sitters.

The biggest takeaway related to Solskjaer today should be that his squad selections over the course of the season have improved the side and added consistency that didn’t exist under José Mourinho.

Almost every single player in the United squad has a defined role. The majority of today’s defence, as well as Scott McTominay, Marcus Rashford and Anthony Martial, are starters. The likes of Daniel James and Mason Greenwood lead the list of players that make an impact in and out of the side, while players such as Phil Jones and Nemanja Matic only play when absolutely needed.

The consistency of selection allows Solskjaer to plan long-term youth promotion and transfer activity. Presently, it allows the United squad and staff to work on finding Paul Pogba’s place in the side after his return today from injury.

Scott McTominay is a United’s best midfielder after Pogba, but he can’t do it alone

Scott McTominay’s poor performance today provided yet another sign that Manchester United need a new midfielder to play alongside him. The last half-dozen or so matches have proven that McTominay and Fred can both play a part at United, but are unlikely to tear the Premier League apart as a duo.

Being two of the Premier League’s better midfielders off the ball allows McTominay and Fred to succeed in matches where United hold less possession. This provides an explanation for Fred’s success in the Champions League while playing for Shakhtar, as well as United’s big-game record this season and last season’s heroics against Paris Saint-Germain.

Unfortunately, the magic ends when the ball arrives at the feet of the two midfielders, as neither break lines with their passing. While United’s attacking midfielders are not of requisite quality, it would help if they had more time on the ball. It would also help if Anthony Martial did not have to drop to the half line to receive the ball.

Instead, most of the side’s transitional burden falls on Harry Maguire and Victor Lindelof, which is a lot to ask from two players who rarely cross the half line. A world-class passer needs to be added to United’s midfield to replace Fred or McTominay, particularly if Pogba’s future lies further forward or away from the club.

I am inclined to say that McTominay, not Fred, should retain the other place in midfield. His tactical awareness, assured decision-making and defensive positioning has helped Solskjaer compensate for the loss of Ander Herrera last summer.

Aaron Wan-Bisssaka and David de Gea aren’t perfect, but they shouldn’t have to be

Four Premier League sides have a better defensive record than Manchester United. After the disastrous defending on display last season, that is a remarkable improvement.

Errors from David de Gea in consecutive matches, and today’s penalty giveaway from Aaron Wan-Bissaka, have led to points dropped for United, who could’ve easily come away with four points from six in the last two league matches had those errors not been made.

One could argue that de Gea’s performance levels have been below standard for 12 months now, but that is an entirely separate debate. The fact of the matter is that United should be scoring 2-3 goals in any given match against sides of Watford’s calibre, if not more. If they were, they would comfortably be in the top four.

As for Wan-Bissaka, while he joined for a big fee, he has been one of Europe’s best fullbacks this season and is only 22. He should be able to make an error once in a while, especially given the fact that he has been nearly flawless defensively since joining.

Manchester City’s league-winning sides had excellent defensive records not through individual brilliance, but through dominance of territory and midfield. United’s defensive record is worse than City’s despite having competent and fit players because, simply put, they spend much more time defending than their inter-city rivals.

Improving United’s dominance matches should significantly help in reducing the amount of individual errors made by Solskjaer’s defence.

Marcus Rashford, Dan James, and to a lesser extent, Anthony Martial, were all ineffective today. However, it’s difficult to think of many opportunities that they had to influence proceedings before Pogba entered the fray.

Rumours around James Maddison and Bruno Fernandes were circulating in the summer for a reason; even with Pogba in the side, United were not creative enough last campaign. Given that Pogba has been gone for most of the season, it is actually remarkable that Rashford, Martial and James have produced the numbers in front of goal that they have thus far.

With Pogba’s future and fitness uncertain, United have been left to choose from Andreas Pereira, Juan Mata, and Jesse Lingard in attacking midfield.

Stylistically, Pereira is the prototype, with the ability to press, break the lines, offer presence in midfield, and hurt defences on and off the ball. However, half a season of Premier League football has shown that Pereira does not have enough quality in any of those areas to play for United long-term.

Mata is the most talented of the trio and the best linkman, but his performances in recent years have not matched his early-United form, which already did not stack up with the Mata that tore defences apart at Chelsea. This is perhaps because, stylistically, he simply isn’t suited to the high-pressing and pacey attacking demands of Solskjaer’s, or even Jose Mourinho’s system.

Lingard, at his best, shows flashes of real quality and offers similar energy and presence to Pereira, but he can be very frustrating to watch. Performances as dire as his display against Watford are far too frequent and dilute his impact when analyzed over the course of a season or career.

It is criminal that the need to recruit players for the fulcrum of Solskjaer’s attack went unmet this summe. United need to purchase a player to solve this problem as soon as possible.

United are unlikely to make the Top 4 this season, but that may not be the worst thing

United’s current 8th-placed position is their lowest since 1989. Given the inability to beat lower-table sides at all, and United’s relative displacement from the Champions League places at Christmas, it is unlikely that Solskjaer, or any manager, would be able to coax enough improvement from the current crop of players to be in the Top 4 by May.

However, there are plenty of positives to look at. Other than de Gea, United’s oldest player on the pitch today was Lingard, 27, pointing to long-term improvement. Long-term manager or not, Solskjaer seems to have reinvigorated the United squad, and, adding a few players to the setup, it could be worth waiting for a few years to see the real results of the ongoing work at the club.