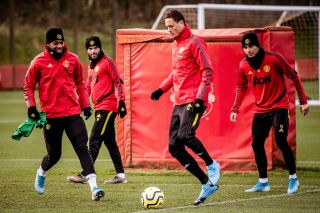 Atletico Madrid are interested in a move for Nemanja Matic, according to Gianluca Di Marzio.

The report states Diego Simeone’s side will look to sign the midfielder once his Man Utd contract expires at the end of the season.

That means the Serbian will remain at Old Trafford beyond January.

He’s no more than an option from the bench these days but could still play a role in the remainder of our season as Ole Gunnar Solskjaer hopes to qualify for the Champions League next season.

I don’t think Matic has the legs anymore — to play at the very top — so reported interest from Atletico comes as a surprise. Simeone’s side tends to be highly energised and Matic has the mobility of a baby elephant right now.

Hopefully United dip into the market for a better defensive-minded midfielder than Matic when the times comes for him to depart.

A reunion with José Mourinho would cause a few laughs but looks unlikely. The Daily Mail had a report on Tottenham ruling out a move for the 31-year-old.

Matic lost his place in the team this season to Scott McTominay.