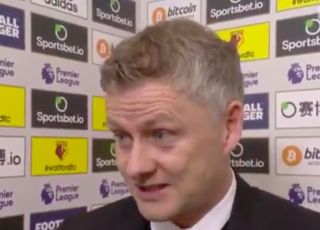 Ole Gunnar Solskjaer was understandably frustrated by one of the worst performances in his managerial reign as Manchester United were defeated 2-0 by rock bottom Watford at Vicarage Road this afternoon.

The Reds were outplayed by Nigel Pearson’s side, offering little threat until it was too late two goals down late on.

Watford took the game away from United early in the second-half, after a dreadful first half showing from the Reds.

David De Gea was responsible for the first goal as he somehow failed to deal with Ismaïla Sarr’s tame effort. Minutes later Watford doubled their advantage with a Troy Deeney penalty.

United improved somewhat in the closing stages when Paul Pogba returned, but by then the damage had already been done.

Solskjaer has reacted to the two key moments in the game; Jesse Lingard’s first half miss and David De Gea’s clanger for Watford’s opener.

Hear what he had to say on the performance below, courtesy of Sky Sports.

"We started slow. When you concede two goals like we did in quick succession, we gave ourselves too much to do."