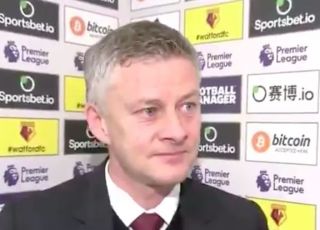 The Frenchman has been out of action since aggravating an ankle problem in the draw against Arsenal on September 30, but could feature from the bench in today’s game.

It’s great to see the midfielder back in the squad; Pogba is a player of genuine quality that United have missed when struggling to break down defensive minded opposition.

Fred and Scott McTominay return in the midfield pivot after being rested in the Carabao Cup victory over Colchester on Wednesday, and Jesse Lingard starts in the number 10 role.

Nigel Pearson is likely to have his Watford side organised and stubborn defensively, so United may need Pogba or Mason Greenwood to provide a spark from the bench.

Ahead of today’s game, Solskjaer stressed the importance of Pogba’s return from injury and praised him impact in the dressing room as well as on the pitch.

Listen to Solskjaer’s pre-match thoughts below, courtesy of MUTV: