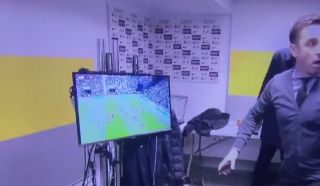 Manchester United lost 2-0 at Vicarage Road to bottom of the table Watford this evening.

Ole Gunnar Solskjaer will be disappointed with his side’s performance but he too deserves stick for the result.

How can a team go from convincingly beating Tottenham and Premier League champions Man City in the space of one week to losing against this Watford side?

De Gea made a genuine howler for Watford’s first and Neville was left baffled watching the replays.

Shreeves was in the middle of an interview with Mourinho before his Spurs side take on Chelsea.

Former United boss Mourinho laughed it off and passed a comment on Neville being unable to contain his emotions when it comes to MUFC.

Watch the interview below, courtsey of Sky Sports: