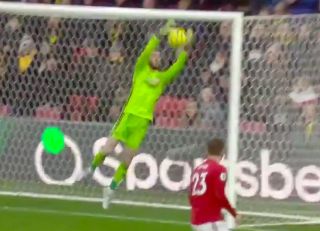 Watford lead 2-0 after a disastrous start to the second half for Manchester United at Vicarage Road.

The Reds have had the same problems in breaking down a well organised defence and have got what they have deserved here in going two goals down.

While United deserve to be behind, the mistake by David De Gea for Watford’s first goal is inexcusable.

The Spaniard somehow let Ismaïla Sarr’s tame shot in at the near post after United failed to defend a set piece situation adequately.

Manchester United fans on social media have unsurprisingly voiced their frustrations at De Gea for the clanger.

De Gea was regarded as the best ‘keeper in the world but his form has regressed in 2019 and this error is the latest indication of that.

United have under half an hour to turn a game around they have been dreadful in.

Of all the games for De Gea to make his biggest mistake of his career….

I’m not just looking at De Gea this season, I’m looking at his form in 2019, and overall it hasn’t been great. Romero deserves a chance. #MUFC

That's got to be De Gea's biggest mistake of his career. It gets worse every time you watch it. There is no pace on it at all #MUFC #WATMUN pic.twitter.com/u4ICy8yUqE

• Jesse Lingard attempting a chip when he's not scored a league goal in 2019
• David De Gea being unable to catch a ball
• Aaron Wan-Bissaka missing a tackle & conceding a penalty#mufc are literally their worst own enemy.

From the best goalkeeper in the league to this…

Watford had scored five home league goals before today. #mufc have spent £125m on the defence and the improvement hasn't been good enough. They need more from Maguire at both ends. Shaw has to be told to get forward by the manager. Lindelof and De Gea have regressed.

All I want for Christmas is a clean sheet. De Gea, I love you, but what the f*ck.

De Gea is passed his best ffs too many of these errors. They aren’t anomalies they are consistent now ffs