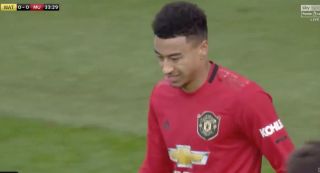 It remains goalless at Vicarage Road where Manchester United need all three points to close the gap on fourth place.

Tottenham host Chelsea in the late kick-off this Super Sunday, so all eyes will be on that fixture once we’re finished up here.

But Man Utd still have lots of work to do.

Ole Gunnar Solskjaer’s men have been sloppy in the first-half with Watford argubly being the better side up until now.

Jesse Lingard missed an absolute sitter from a one-on-one opportunity.

Instead of slotting the ball past Ben Foster, with both corners free, the United playmaker attempted a chip on goal which sailed over the bar.

Check out Lingard’s miss below, courtsy of Sky Sports:

Jesse Lingard races through on goal but his chip sails over!