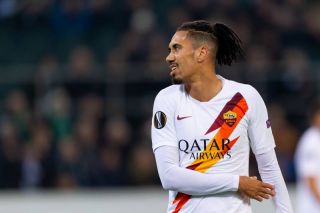 Life in Italy is going to plan for Chris Smalling. A regular place in the Roma starting line-up has led to cult hero status, so it wouldn’t be a surprise if the Manchester United centre-back wanted to make his loan move to the Italian giants permanent.

And that is what’s being reported in Italy this morning.

Smalling has been one of the best defenders in Serie A this season and there have been claims in the media that the Giallorossi are keen to sign the 30-year-old.

Man Utd’s executive vice-chairman Ed Woodward is aware of this and will be thinking about how Smalling’s form will warrant a higher price tag — should Roma look to sign him in the summer.

In November, The Sun reported that Roma were ready to increase their offer to £13million for Smalling after their opening bid was rejected.

That bid was likely pushed back as United will demand a price somewhere in the region of £20million for Smalling.

Roma may have cold feet about paying £20m on a player in his 30s, and maybe the best chance of securing the Englishman is if the player himself asks for the move…

However, a report in Il Messagero claims that Smalling has decided he wants to stay in the Italian capital.

The perfect way to end the year! Thank you to all the fans for the love and support which has been non stop. Happy holidays and then we are back to kick on again in 2020! #forzaroma💛❤️ pic.twitter.com/XuwFBuB2mM

Apparently Smalling met with club officials last week and told them that he wanted to stay. It supposedly helps that his wife and ex-model Sam Cooke loves Rome and is willing to remain there rather than return to the UK.

We are delighted to hear Smalling is enjoying life in Italy and impressing on the pitch to a point he is being appreciated a lot more than he was with us in the Premier League.

The game may suit him better in Italy, but Rome will have to edge closer to United’s demands if they want him beyond this season.