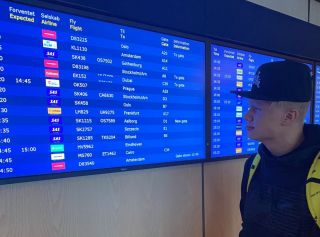 Erling Haaland’s father, Alf-Inge, jumped at the opportunity to make fun of reports that circulated this morning about his son.

The Daily Mail was among publications suggesting that the Red Bull Salzburg striker was en route to Manchester to hold talks with Ole Gunnar Solskjaer.

Speaking at his press conference at Carrington this morning, Solskjaer dismissed the reports as untrue, as per The Telegraph.

And he wasn’t lying. Haaland’s father has provided evidence by sharing a picture of his on Twitter beside a flight schedule screen.

Bu Alf-Inge tagged a reporter in his tweet, adding “Have another guess” to the caption.

This is grade A piss-taking and we love it!

The reports were incorrect and got a few of us excited this morning when it sounds like Haaland is simply taking a break somewhere for Christmas.