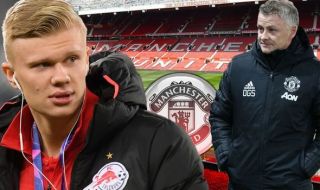 Ole Gunnar Solskjaer addressed claims that Erling Haaland is on a flight to Manchester, at this morning’s press conference at Carrington.

The Norwegian coach was due to speak to the media as he previews Manchester United’s upcoming Premier League fixture against Watford.

Solskjaer was always likely to be asked for an update on the club’s January transfer window plans as well as reports from the Daily Mail suggesting Haaland was already en route for talks in Manchester.

Asked whether Haaland was on his way for talks, Solskjaer replied (via Manchester Evening News): “I don’t think he’s en route here, to be fair, not through me anyway. You know I can’t comment on other teams’ players, I’ve said that many times and that’s just one of those things in this job — you get speculation a lot of the time.”

Even if he was due for talks in Manchester with United, Solskjaer unlikely to admit that to the press when Haaland is still a Red Bull Salzburg player.

We do think something is going on though, and it would be a massive coup to pull off in January. A proper goalscorer could give United the push needed to clinch a top-four spot.

The manager was asked about a more general question on transfers in January and he repeated what he’s been saying all along re: right age, a player who will fit into the squad and for the right value.

“Yeah, as a manager you always hope that you can do something but then again it’s not something that’s nailed on.

“It has to be the right player. Right age, gonna fit into this squad and for the right value. We’re always looking and the transfer window is open but it might not happen.”

Liverpool have already got one deal done and dusted for January, so it’s possible with the right planning and negotiation techniques.

Ed Woodward has known all season that Solskjaer is lacking in quality and depth up front. The club should be doing all they can to back the manager in January because he needs it.

"In this job you get speculation all the time." ✈