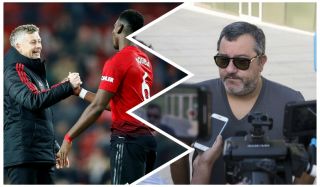 While claiming that Paul Pogba wants to stay at Manchester United, Mino Raiola suggests the club needs to employ a sporting director.

Pogba has been heavily linked with a move away from Man Utd for some time now and has missed most of the season with an ankle injury.

We are still waiting on his return from to the squad which has lead to questions over his commitment to the club.

Pogba was seen throwing hoops in the United States and dancing at his brother’s wedding last week, both whilst injured and ill (unable to play for United).

According to The Times, Real Madrid made a bid for Pogba that was rejected last summer, but The Athletic believes that the La Giants will be back in for him again next month.

But Raiola claims Pogba actually wants to stay at Old Trafford and while doing so, the Italian super-agent aimed a dig at the club’s hierarchy.

In an exclusive interview with the Telegraph, Raiola says Pogba would ‘love’ to be successful at United.

“Paul wants to be successful and happy and wants to win prizes and he would love top do that with Manchester United,” Raiola explained.

“Okay there was big interest from Real Madrid and Manchester didn’t let him go.

As mentioned by ourselves at Stretty News time and time again, United can be criticised for looking at things with an economic approach rather than a sporting approach.

Raiola touched on that too.

“In truth, I look at Manchester United and think they have more an American mentality than a European one,” he added.

“By that, I mean that sometimes it seems the club is more concerned about the economic part than the sports part and that is a very American way of thinking.

“They need someone to connect the economic side and the sports side.”