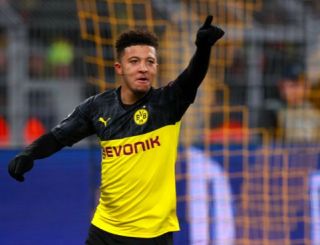 Jadon Sancho is one of the most coveted footballers across Europe and there’s no surprise that Manchester United are among the clubs interested in is signature if he was to leave Borussia Dortmund.

The 19-year-old winger has scored nine goals and contributed eight assists in the Bundesliga already this season.

Talksport reported last month that Sancho was unhappy in Germany and felt like he was being made a scapegoat at Dortmund, but he has been told he won’t be allowed to leave until the summer.

In his latest update, Fjortoft claims Dortmund have set a staggering £127m price tag on Sancho, who taken the Bundesliga by storm since his arrival from Manchester City in 2017.

A move to Liverpool is still said to possible for Sancho, but the Anfield club have cooled their interest after discovering his asking price.

United, meanwhile, shouldn’t be put off by the huge fee as Sancho as he has the potential to become one of the best wingers in world football and could fit Solskjaer’s fluid attacking system perfectly.

Contrary to Fjortoft’s update, The Mirror reported that United believe they are in pole position to sign Sancho in the summer.

Sancho is likely to be centre stage of the biggest transfer saga of the summer; with a host of top European clubs looking to sign him if he decides to leave Dortmund.

Sancho has been told he MUST stay till summer at least. So NO January- move possible.
“Goals/assists/wins”

I understand Liverpool still on, but gone a bit colder after Dortmund has been let it known that they want 127 million pounds for the player