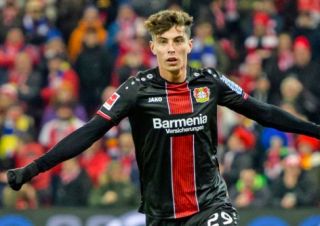 Laurie Whitwell, reporter for the Athletic,  held a live Q and A session on Friday afternoon and supported claims earlier in the week that the 20-year-old has held talks with officials at Old Trafford by saying that he is a ‘genuine target’.

According to German publication Bild, United, Manchester City, Bayern Munich and Real Madrid are all interested in the German international.

The report claims both Manchester clubs have held ‘concrete talks’ for the midfielder, who is one of the most coveted talents in the Bundesliga.

Havertz is a player of immense talent and has already earned seven caps for Germany under Joachim Low, scoring his first goal for his country against Argentina in October.

The attacking midfielder has scored 31 times for Leverkusen since rising to first-team prominence aged 17.

Whitwell suggested Leverkusen may hold out for up to £100m for their prized asset, but the Bundesliga side are open to negotiations.

The complexity of this deal means it is unlikely that United could pull it off in January, but Havertz is certainly a player United should continue to track and pursue in the summer.

Ole Gunnar Solskjaer is lacking an attacking midfielder who has the ability to unlock defences and create chances for his attacking trio, and Havertz has the potential to be the solution in a number 10 role at Old Trafford.