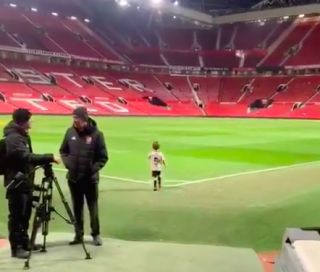 It’s any young child’s dream to run out on the pitch at Old Trafford.

And for Harry Maguire’s nephew, that dream became reality after adorable footage emerged after Manchester United’s victory over Colchester on Wednesday evening.

The video was posted by Maguire’s sister Zoe, who is able to provide her son with special memories thanks to her sibling playing for the Reds.

READ MORE:  Angel Gomes could leave Manchester United on a free transfer at end of season

Maguire has been a mainstay in Ole Gunnar Solskjaer’s side this season since his arrival from Leicester City this summer.

He has often assumed the captain’s responsibility in the absence of club captain Ashley Young in the starting eleven and has settled into life at Old Trafford.

The England international has soon become a leader at the club and is a player the United manager can rely on.

We expect him to continue his partnership with Victor Lindelof on Sunday as the Reds play Watford at Vicarage Road.

See the cute footage of his nephew, courtesy of Zoe Maguire’s twitter below:

At last he’s walking on the pitch with uncle harry and he’s a captain too ❤️@ManUtd @HarryMaguire93 pic.twitter.com/IB2kM9Ud7X