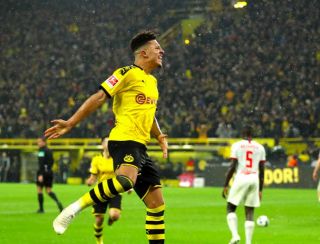 Sancho has now scored 9 goals and contributed 8 assists in the Bundesliga this season, despite reportedly being unhappy in Germany.

Talksport last month claimed that the England international was considering his future at Dortmund, after being treated like a ‘scapegoat’ for the club’s problems.

And according to a report in the Mirror,  Manchester United believe they are in pole position to sign the 19-year-old winger.

But Fjortoft’s update on Thursday morning has revealed that Sancho has been told that he must stay at Dortmund until at least the end of the season, ruling out any potential move in the upcoming January transfer window.

He says a move to Liverpool is ‘still on’, but the league leaders have cooled their interest because of the staggering price tag for the player.

Sancho is arguably the most promising young winger in world football and his reported desire to leave the Bundesliga will put Europe’s most elite clubs on red alert.

But if the England international returns to the Premier League, his most likely options appear to be Anfield or Old Trafford.

While Liverpool are a club with the foundations already in place for success and are mentioned in this update below, we still hope United could pull off a deal for Sancho next summer.

Sancho has been told he MUST stay till summer at least. So NO January- move possible.
“Goals/assists/wins”

I understand Liverpool still on, but gone a bit colder after Dortmund has been let it known that they want 127 million pounds for the player

Julian Brandt, that turn is just 😍

Dortmund find themselves 2-0 up against the league leaders!