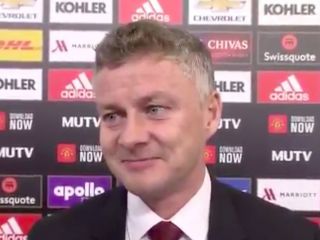 The tie, played over two legs, promises to be thrilling viewing after the Reds defeated Pep Guardiola’s men at the Etihad last time out.

City will no doubt be fired up for the clash and will be looking to avoid a repeat of United’s 2-1 win, as they had no answer to the rampant Reds counter-attack.

United secured their passage through to the semi-final of the competition with a comfortable 3-0 victory over League 2 Colchester.

Solskjaer named a strong line-up to avoid any potential upset after nearing a calamitous early exit against Rochdale, but a predictable first-half was played out.

Despite having almost all of the ball, United lacked inventiveness and creativity to break down a well-organised defence. In the end, a ten minute second half blitz was enough to see off the opposition with the Reds clearly fired up after the break.

Rather strangely, however, Solskjaer says he preferred United’s first-half performance to the second-half, where the Reds were more clinical and took their opportunities.