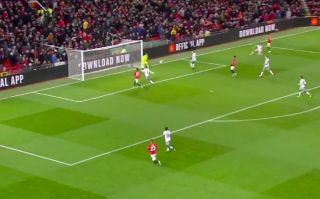 Man Utd have come out firing in the second-half to make it 2-0 in the space of 5 minutes.

Marcus Rashford scored the first, which was a stunning solo goal after a fantastic long ball by Nemanja Matic, and he will want to claim the second as well.

Unfortunately it’s gone down as an own goal for Colchester United’s R. Jackson.

The right-back was caught out of position for Rashford’s opener so it would be fair to say he’s not having the best of nights at Old Trafford.

We can’t complain with the goal not being given to Rashford as it clearly comes off Jackson’s leg.

Watch the goal below, courtsey of Carabao: