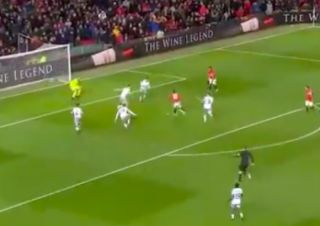 Marcus Rashford has given Manchester United the lead in the Carabao Cup quarter-final clash against Colchester at Old Trafford.

All too predictably, the Reds have struggled to break down the stubborn and well-organised League 2 opposition defence.

United had a host of first chance openings, but failed to convert with Rashford and Anthony Martial both squandering opportunities with poor touches.

But quality finally told and Rashford has finally opened the scoring with a piece of individual brilliance following a rare Colchester attack.

Some quick thinking and pin point execution from Nemanja Matic meant the England international had the freedom of the Old Trafford left-wing, and cut inside two Colchester defenders before firing an unstoppable strike home from close range.

The 22-year-old is currently in the form of his life under Ole Gunnar Solskjaer and has four his home on the left flank. His goal this evening brings up is 14th in all competition for the Reds so far this season.

See his goal below, courtesy of Carabao: