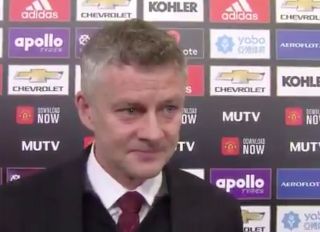 Anthony Martial and Marcus Rashford both start in attack, alongside Mason Greenwood who is rewarded or his impact from the bench against Everton.

The promising central defensive partnership of Harry Maguire and Axel Tuanzebe returns, while Nemanja Matic and Juan Mata get minutes in midfield.

The Reds struggled earlier in the competition with a weakened team against Rochdale, with Solskjaer cautious with his strong team selection against League 2 Colchester this evening.

The United boss has reiterated the importance he places on the competition, seen as the least desirable to win in English football.

Whilst United are still competing in the Europa League and FA Cup, the Carabao Cup seems Solskjaer’s most realistic route to silverware this season.

See what Solskjaer had to say about the line-up below, via MUTV:

🗣 "It's a competition we want to go all the way in."#MUTV caught up with Ole ahead of tonight's #CarabaoCup quarter-final… pic.twitter.com/qVi4RPxtBd