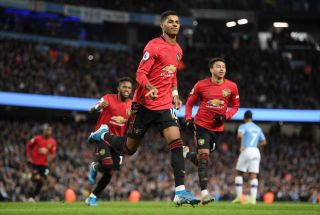 Manchester United’s 3-0 victory over Colchester United in the Carabao Cup at Old Trafford this evening has set up a mouthwatering semi-final tie against Manchester City.

The Reds weren’t convincing in large stages against the League 2 outfit, but got the job done thanks to an early second half blitz where three goals were scored in just ten minutes.

The game mirrored the victory over AZ Alkmaar a week earlier, where the floodgates soon opened after United suffered from a lack of ideas in breaking down a stubborn defence.

Rashford found the deadlock with a wonderful solo strike and has posted his immediate reaction to the semi-final draw against City.

It promises to be a fantastic occasion against Pep Guardiola’s side, who United will know they can beat over the two-leg contest.

We expect Ole Gunnar Solskjaer to adopt a similar setup at the Etihad to the one that helped secure victory in the league this month, as long as United can get a good result in the first-leg at Old Trafford.