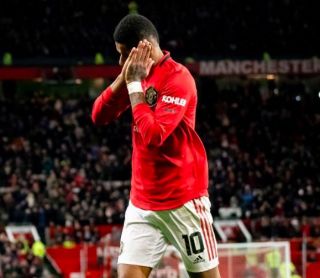 Marcus Rashford is enjoying the form of his life at Manchester United this season.

The England international has broken his goal record for the season over the last five campaigns and we haven’t even reached the new year yet.

Operating in a left-wing role under Ole Gunnar Solskjaer, Rashford is looking his most dangerous.

Rashford continued his goalscoring form tonight with a stunning solo effort in the Carabao Cup against Colchester at Old Trafford. He latched on to a through ball from Nemanja Matic and dummied two Colchester defenders before firing an unstoppable effort into the top corner.

It was Rashford at his best and gave United the lead after a predictably dull first-half where the Reds struggled to break down a stubborn opposition defence.

He was unlucky not to get a second moments later as well as a cross was diverted in off a Colchester defender just as the forward was about to pounce.

Rashford has now scored 14 goals in all competitions for the Reds, and we wouldn’t bet against him doubling that tally by the end of the season as he is brimming with confidence.

United’s 3-0 victory over Colchester mean they face a semi-final tie against Manchester City in the Carabao Cup.

14 – Marcus Rashford has scored 14 goals in all competitions for Manchester United this season – his best tally in a single campaign for the club. Evolution. pic.twitter.com/CkOSvt7CDn