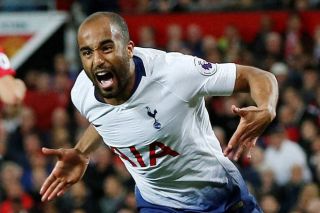 Lucas Moura has admitted that he was “very close to signing with Manchester United” back in 2013 after holding discussions with Sir Alex Ferguson.

Back then the Brazilian was one of the most sought-after young footballers in the world.

His exploits at Sao Paulo had brought him the attention of leading clubs across Europe, with Paris Saint-Germain eventually sealing the deal.

United were among the clubs interested in signing Lucas, with transfer talks held, but he later decided to join Ligue 1 giants PSG.

Lucas spoke to ESPN Brazil (via the Mirror) about how close he came to moving to Old Trafford, saying, “Yes, there was a conversation.

“I was very close to signing with Manchester United. It was still at the time of Ferguson.

“I ended up choosing PSG, I spent five fantastic years there, I won a lot, learned a lot. I do not regret it.

“Despite the hard times, the bad times, I don’t regret it because I grew a lot, I learned a lot. Now I’m here in the Premier League, and it’s a new hope.”

Lucas became a Premier League player when he completed a switch to Tottenham in January 2018 and has since made 78 appearances, scoring 20 goals.

Lucas added on Mourinho: “He arrived, was more relaxed, he spoke of the time of Sao Paulo, which her talked to my parents when he was at Real Madrid.

“It was more relaxed. He always asks how I am. It’s very cool, I always have this openness with him to talk. Even because of the language, it makes it a lot easier.”

The 27-year-old has become a regular in the Spurs side since Mourinho’s appointment, having scored three times in five Premier League matches.

But it’s interesting to see how his career could have taken a very different path had, in 2013, he accept Ferguson’s interest and developed in Manchester instead of Paris.