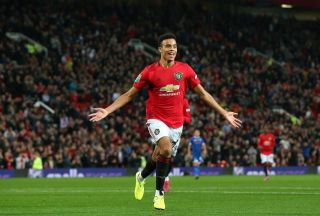 Manchester United host Colchester in the Carabao Cup quarter-finals tonight and Ole Gunnar Solskjaer has fielded a squad mixed with youth and experience.

Sergio Romero gets the nod between the posts and will play behind a back-four of Ashley Young, Axel Tuanzebe, Harry Maguire and Luke Shaw.

In midfield we see Nemanja Matic gain minutes after his return from injury, partnered by Andreas Pereira, with Juan Mata expected to play in the hole to provide the attacking players with quality service.

Check out the full line-up below, courtsey of @ManUtd:

📋 Your #MUFC XI to face Colchester in the #CarabaoCup…

The Red Devils changed their pre-match preparations ahead of the tie.

They usually stay at the Lowry Hotel for home games but they switched to the Crowne Plaza Hotel this afternoon in an attempt to avoid the heavy traffic in Manchester.

When the matchday squad was revealed earlier, via Manchester Evening News, Angel Gomes’ absence was most noticeable. He participated in last Wednesday’s open training session at Carrington, but was overlooked for the matchday squad again. He also didn’t feature for the under-23s in their win in the league on Monday night.

This certainly spells doubt over his future since there’s a contract on the table waiting to be signed by the player.

Unfortunately this game hasn’t been selected to be broadcast on television — with Man City bus Oxford on instead — but they won’t stop us keeping you updated throughout the match.